Handling images on the Gamebuino META

How to make your images for the META

Many graphic creation tools exist to create all the graphic elements that will compose the universe of your game, whether they are static or animated. I propose you some of them that caught my attention (but there are many others, more or less sophisticated):

I’ll let you discover them by yourself. This is not the purpose of this tutorial…

To focus my point, I will take the example of a platformer (a platform game), in which we will have to control a character, our avatar, to tell him how to move in his environment. We will therefore need a graphic element that is animated, to visually represent the actions performed by the avatar. In the field of video games, we call this a sprite.

Let’s consider the following sprite, which is relatively simple, and which allows us to animate our avatar in successive steps to give the illusion that he is walking or running (depending on the speed at which we link the steps):

Breaking down a frame-by-frame animation

The animation is made with a sequence of images (also called frames), which are displayed successively for a short time, in a specific order. It’s exactly the same principle we use in movies. This is also the same principle we use to create animated GIFs. But to animate our avatar in the game, we need to have total control over the order of the frames, as well as over the speed of the animation. This is where the code comes in.

Anatomy of a sprite

Let’s start by taking a closer look at our sprite to see what it is made of:

It consists of a sequence of 4 frames each described on a grid of 8x8 pixels. Each pixel is characterized by a color in the #RRGGBB format. This is a very common format, found on the vast majority of graphic creation tools, allowing a color to be located in the RGB888 color space. This means that the intensity of each of the primary red, green and blue channels that make up the color is stored on 1 byte (8 bits). Since we have 3 channels, then it takes 3 bytes (3x8 = 24 bits) to store the color. Each byte can be broken down into a pair of 4 bits, so we get 3 pairs of 4 bits:

In this format, each group of 4 bits is simply written in its hexadecimal form.

For example, let’s take the index 3 color #E8C47D in the palette of colors that make up our sprite. By the way, to make it clear that this is a value expressed in hexadecimal, we prefer to write it as 0xE8C47D, which is the one used in the C++ language. This color in RGB888 format can be broken down into 3 bytes (3x8 bits), as we have just seen, as well as 6 hexadecimal digits (6x4 bits), in the following way:

Anatomy of an RGB888 color

If graphic utilities allow us to work in the RGB888 space, the META screen can only display RGB565 colors. It is therefore necessary to convert the colors in this space. 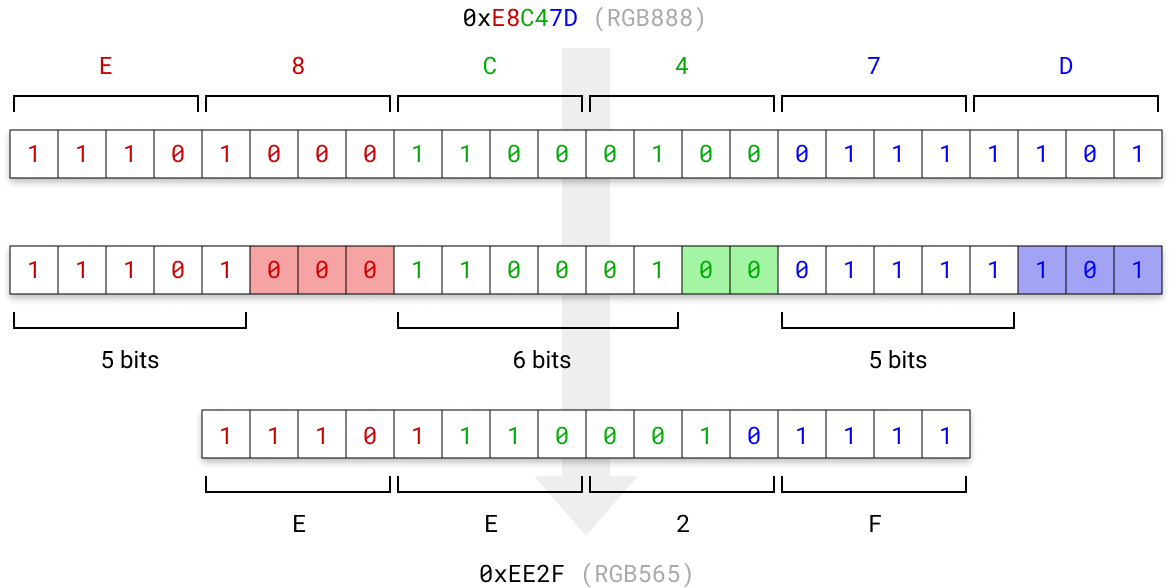 We obtain a sequence of 16 bits that we can then reinterpret as 2 pairs of 4 bits, that we just have to rewrite in their hexadecimal form… and the trick is done!

Now it’s your turn: try to convert each color in the palette to make sure you understand the conversion mechanism. To check your results, you can use the following converter (no need to prefix the value to be converted with # or 0x):

Once the calculations are done, you should get the following values:

There is one last important point to be addressed to finalize our sprite, it is the transparency. Indeed, the frames that make up the sprite contain pixels to which we have not assigned any particular color. And for good reason, since these pixels must remain transparent when displayed. In other words, if the sprite is placed in the foreground of the display, as on a layer, it must be possible to distinguish what is “behind” it, in the transparent areas.

The gb.display API does not allow for fine-grained transparency level management, but considers a pixel to be either fully opaque or fully transparent. But even if this property remains rudimentary (and even binary in the sense of all or nothing), it is necessary to provide a way for gb.display to determine what should be considered transparent or not.

The solution is simple: you just have to apply a specific color (which will be considered as the transparency color) to the pixels that should be considered as transparent and that will not be displayed on the screen. This implies that this color should not be used as such on the sprite. It should only be used to characterize the transparent areas of the image. In general, a color is chosen that contrasts with the rest of the palette to distinguish it from other colors. Pink or green are commonly used to play this role. But you can choose the color that suits you.

Let’s take the pink 0xFF00FF which corresponds to 0xF81F in RGB565. Note that this color must be taken into account in the color palette, even if it will never be visible on the screen. So on a palette limited to 16 colors, for the indexed color display modes, this is very important, since you only have the other 15 to use on your graphic elements!

New colormap with its transparency color

All that remains is to export the sprite onto a single sheet (called a spritesheet), in PNG format for example, on which all the frames that make up the animation will be juxtaposed. Sprite creation software such as Piskel makes this export very easy:

Export you spritesheet with Piskel

You see that you can set the layout of the frames by specifying the number of columns or rows on which you want to distribute them. Here, I chose to export the board on 1 column of 4 rows. But you can choose the configuration you want. 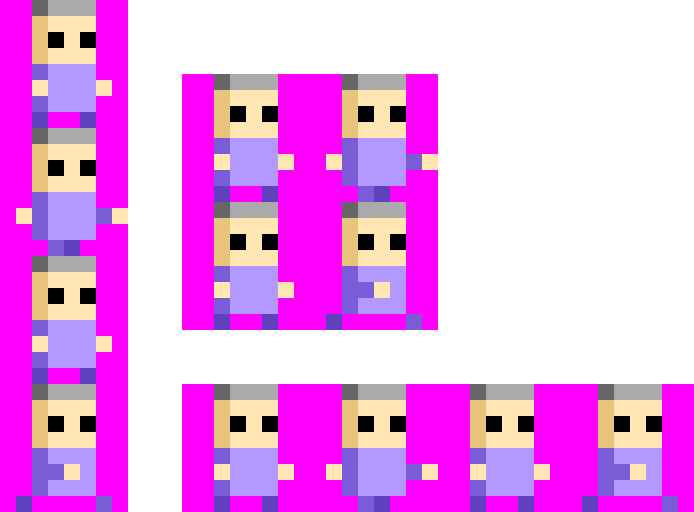 Different layouts of the spritesheet

That’s it, our sprite is now finalized, but the work doesn’t stop here…

In your game, you will also have to provide graphic elements to decorate the game scene. And these elements will not necessarily be animated like sprites. Most of them will even be static. Some elements will represent objects that your avatar may or may not interact with. Some objects will only be there to appear in the scenery. The scenery itself can be built with graphic elements that will be reused many times, such as walls, slabs, walkways, ladders, etc.: 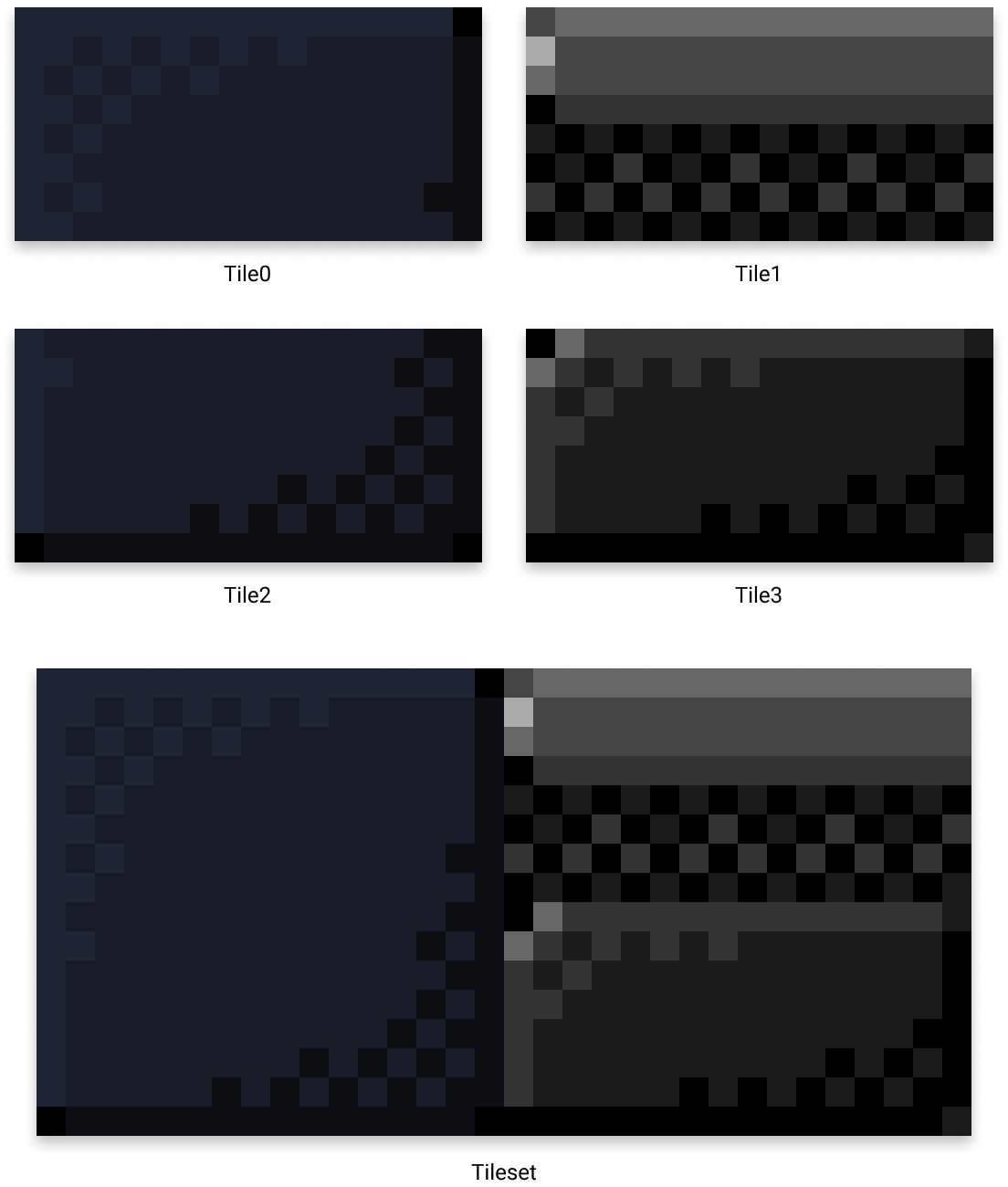 The tileset is arranged in exactly the same way as a spritesheet. In general, tiles that are adjacent on the tilemap are grouped together to better recognize the sets they form when assembled.

Taking into account the tileset has no importance from the point of view of colors with DISPLAY_MODE_RGB565, but it has much more in the case of the 16-color indexed display modes. So you have to make sure that the definition of all your sprites and tilesets does not involve more than 16 colors in total. This is the case here: I finally used only 15 colors in total. Here is the complete new color palette, which includes the sprite and tileset colors:

You will notice however that the color indexes of the pixels that make up the sprite are no longer the same with this new palette. I could have kept them the same, but I thought you’d like it if you had to recalculate the frames of the spritesheet… The motive here is purely pedagogical.

That’s it, all our graphic elements are defined. We then need to convert them into a format that we can use through programming to display them on the screen with gb.display, and this is what we will see in the next chapter.